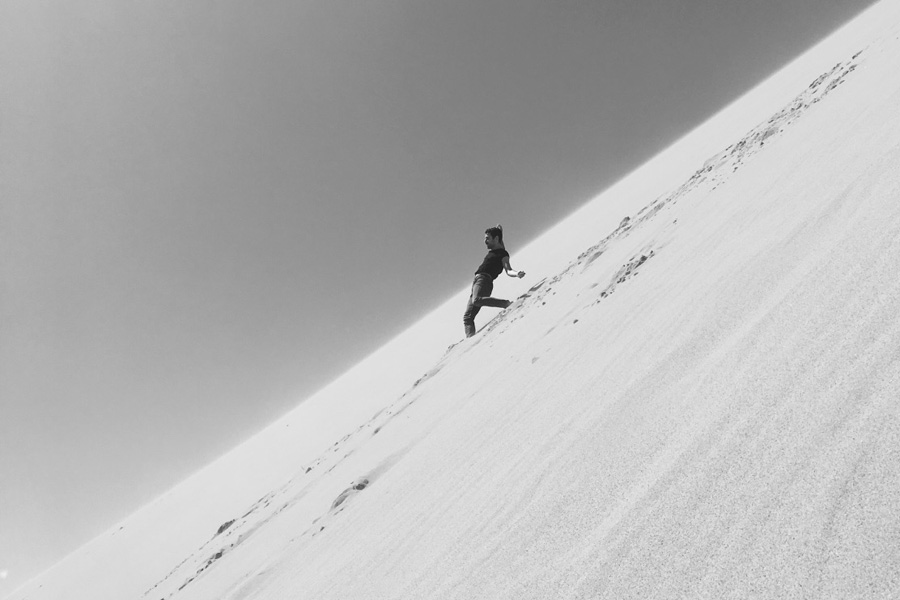 The class builds progressively from deep and static stretching to very physical and dynamic phrases. Some of the main focuses of the class are the explorations of natural connections in the body and how to use gravity (centrifugal force, potential and kinetic energy...) and the floor as dance partners. We will look towards ways of developing a strong sense of organicity, with a strong emphasis on creating spirals through opposition and clever use of the gravity centre, finding a balance between what you control and what you let happen, how to recycle the energy of a movement into another, how to increase the speed of your dancing in a relatively effortless and released way.
The class challenges the participants to take the risk of exploring their physicality as far as they can, as much in their flexibility than in the intensity of their dancing.

This Workshop is assisted by Aimilios Arapoglou

Aimilios Arapoglou is a greek dancer and dance maker who has been creating and performing professionally in Greece and Internationally since 2011. He is a graduate of both the International and European Relations program of University of Piraeus as well as the Greek National State School of Dance. Now Brussels based, Aimilios has worked with many talented art makers, including Linda Kapetanea and Josef Frucek (Rootlessroot)in collaboration with the musician John Parish and his band, David Zambrano, Damien Jalet, Sidi Larbi Cherkaoui ,Scottish Dance Theatre,Mor Shani, jukstapoz dance Company and fashion designers Hussein Chalayan,Riccardo Tisci and Iris van Herpen.In October 2014 he was invited to perform at la Monnaie de Munt ,of Brussels, in Shell Shock, an opera choreographed by Sidi Larbi Cherkaoui, written by Nick Cave and composed by Nicholas Lens, which is gonna be performed again at la Philarmonie of Paris in November 2018.In April 2016 he joined the company of Eastman to start rehearsing for the performances of "BABEL 7.16 " at the cour d'Honneur palais des Papes of the festival of Avignon during July 2016 under the direction of Damien Jalet and Sidi Larbi Cherkaoui .Notably, Aimilios was invited to take part of the project, "Bolero", in Paris Opera Garnier,as an assistant choreographer of Sidi Larbi Cherkaoui, Damien Jalet and the performance artist Marina Abramovic. This trio asked for his help again in 2018, when he was a choreographic advisor for the newly adapted rendition of Debussy's "Pelleas et Melisande". He was also invited to collaborate on the original movement research for, "Vessel" that was created at the art residency Villa Kujoyama of Kyoto a collaboration with Visual Artist Nawa Kohei and Damien Jalet. Another exciting recent project was contributing to and premiering the creation of "Skid", a creation by Damien Jalet and visual artist Jim Hodges in Gothenburg, Sweden. In addition to freelance touring throughout Europe, The United States and Japan, Aimilios looks forward to a creative residency in Mexico this August at the invitation of Ceprodac Dance Company. There, as a guest artist and choreographic assistant of Damien Jalet, he will collaborate on a new work, "Omphalos" which is set to premier in Mexico City in November 2018.
Damien Jalet